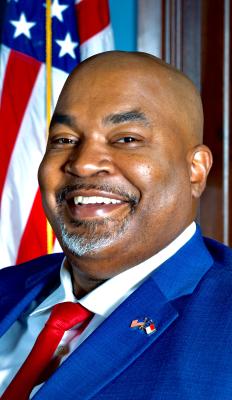 Mark Robinson is a native of Greensboro N.C. and a proud Army veteran. He and his wife are blessed to have two children, and two grandchildren.

As a child, Mark was the ninth of ten children and grew up extremely poor. His father was an alcoholic who routinely abused his mother. However, she was a strong woman of faith who valued hard work. She displayed her faith and hard work heroically for her children after her husband died, providing for them despite only having a fifth-grade education. Mark credits his mother’s leadership for cultivating a foundation for his faith, and an understanding that with hard work he could achieve anything.

In his professional life, Mark has worked in various industries, including a long stint in furniture manufacturing. Unfortunately, like a lot of people in manufacturing during the implementation of NAFTA, he lost not one, but two manufacturing jobs. In addition to working in manufacturing and other industries, he was also blessed to start, run, and sell a successful small business with his wife.

Mark became a household name in 2018 when he delivered an incredibly strong address to the Greensboro City Council defending the 2nd Amendment. This speech went viral and to- date has been viewed over 200 million times online.

Following this speech, Mark began traveling to spread a message of common-sense conservatism: Protecting the life of the unborn, defending the 2nd Amendment, giving control over children's education back to parents, standing up for law enforcement, addressing veterans' care, and enacting election reform.

It was from this platform that in July of 2019, he launched his historic campaign for Lieutenant Governor of North Carolina.

In the primary election, Mark achieved a strong victory in a crowded field of eight impressive candidates, garnering just over thirty- two percent of the vote, allowing him to avoid a runoff, and send a strong message that North Carolina was ready for a Patriot to lead the state.

Upon his successful general election, Mark Robinson became the first black American to be elected to Lieutenant Governor of North Carolina.

He looks forward to working for all North Carolinians to make their lives better, and to help continue to lead the state to new heights.